What's the Virtual CdA and Crr of the LeMond Revolution Trainer? 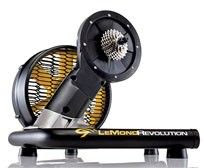 Back in 2011, I was given access to a LeMond Revolution trainer.  One of the selling points of this trainer is it's "road feel", and knowing that the load was produced by air drag, I decided to see if I could figure out what the "virtual" CdA (drag coefficient) and Crr (rolling resistance coefficient) was for the trainer, just to see if it reasonably represented a typical rider and equipment.  Another part of the "road feel" is the inertial mass of the trainer's flywheel, and I was hoping I could figure out the "equivalent mass" that the flywheel represented.  In other words, what mass of a rider (plus bike) traveling down the road does the spinning flywheel mass represent?  Some of you reading this may recognize the figures from a thread I started back then on the Slowtwitch.com forum, and also one on the wattagetraining.com forum.

The majority of the load experienced by a cyclist when riding outside on level ground is produced by aerodynamic drag and the rolling resistance of the bicycle equipment (tires mostly, but bearings as well...) and is very simply represented by the following equation (assuming still air as well).

This equation is handy, because if you divide both sides by V, you end up with a linear equation with respects to the variable V^2.  In other words, the equation of a line is:

What that means is: if you are able to measure the power it takes to travel at various bike velocities, then if you plot the Power/Velocity on the y-axis and the Velocity^2 on the x-axis of a chart, you should see a line where the slope is equal to the CdA and the y-intercept is the Crr.  In fact, this technique is a common one used in field testing and is sometimes known as the "regression method", since it allows one to easily do a linear regression fit to the data.  I just thought I'd apply it to the wind trainer as well...

Here's the result of a constant cadence cassette sweep (only 9 of the 10 cogs of a 12-25 cassette, 60 rpms, with a repeat of the 53-14 at 75 rpm for some slightly higher power.) After the sweep, I did some accelerations/decelerations for the purposes of doing some inertial mass estimate. 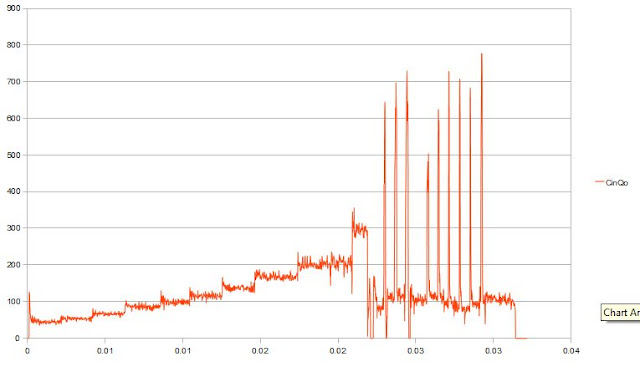 Taking the average of the power and "virtual speed" (i.e. the result of the gearing, cadence, and assumed wheel rollout) over the last 2 minutes of each step (and the last 1 minute of the 75 rpm step), I then plotted P/V vs. V^2 for the following: 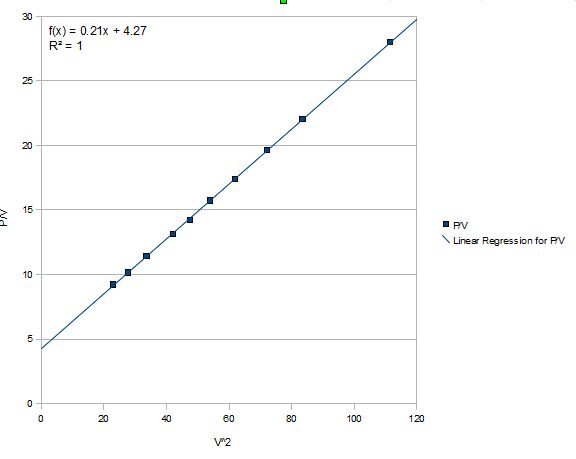 Now...about that estimate of inertial mass. My intent was to plug the file and the calculated Crr and CdA into my VE ("virtual elevation") spreadsheet and then modify the mass entry until the small "hills" formed by the accelerations/decelerations "flatten out"...I tried that, but I realized that I needed to reconsider how varying the mass entry affects the calculated rolling resistance force.  See below.  In a perfect representation, that trace shown below would be completely level.  The fact that it's not means that something is amiss with the modeling, probably the acceleration terms.

BTW, "virtual elevation" is a technique of analyzing power files created by Robert Chung which allows one to estimate drag coefficients given a certain Crr, or vice-versa. See a presentation on the subject by Robert Chung here. 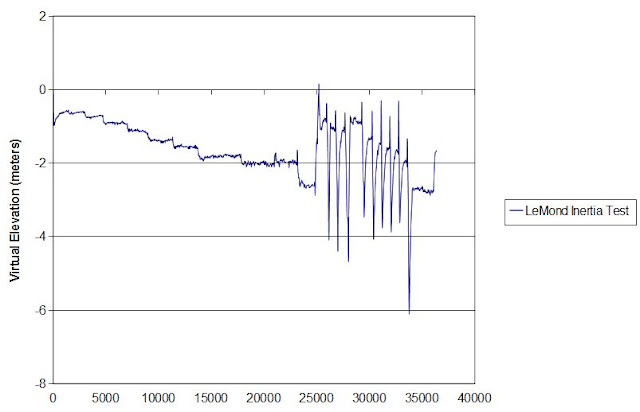 At about this time in the Slowtwitch thread, Robert asked to take a closer look at the acceleration sections near the end.  Here's what that looked like: 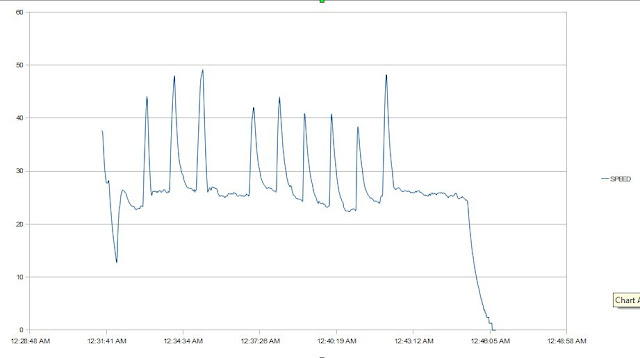 He then asked to see the VE trace in an overlay on the speed trace and so this is what I showed him: 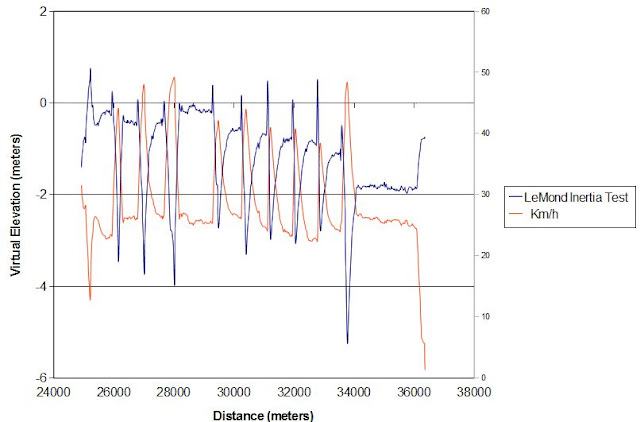 At this point he said: "I presume you were using an all-up mass of around 80kg? So cut that in half to 40kg and double the Crr to .01. That'll keep the steady state power the same but should improve the modeling for the KE component."

Here's what it looked like with the mass decreased by half to 42.5 kg and the Crr increased to .0105 (I played with the Crr to get the best "fit"): 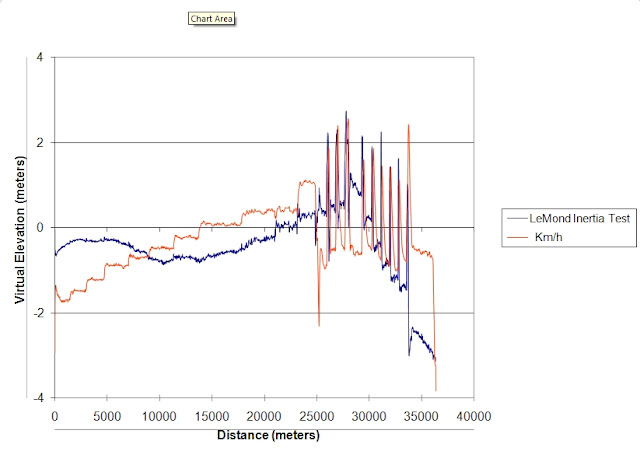 The VE changes between the gear changes at least seemed to have been "smoothed" over...but the accels/decels at the end were still a bit "spikey".

To that, his response was: "Cool. In the original, the VE was "countercyclical" to the speed. Now it's cyclical. I think that means halving the mass was an overcorrection. So the inertial mass is somewhere between 42.5 and 85."

I then played around with the mass and Crr a bit and here's the "best fit" I could find...and I mostly judged it off of the final "tail" which was a coast down to zero rpm. I adjusted the mass (and Crr accordingly) until the final steady-state leg and the coast down to zero had a minimum of "disjoint". This case was actually 100 lbs (45.5 kg) and a Crr of .0094 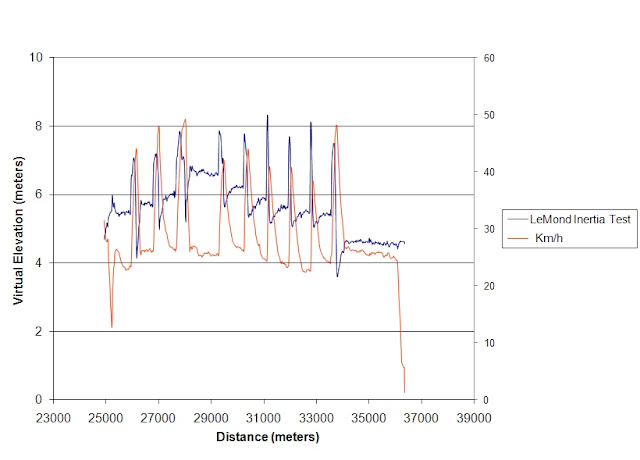 Now...we'll see how close that is to a calculated mass based on the flywheel geometry!

I then pulled the flywheel cover off and measured up the flywheel on the trainer. To calculate the mass moment of inertia, I decided to just throw the dimensions into Pro/E and let it do the calculations: 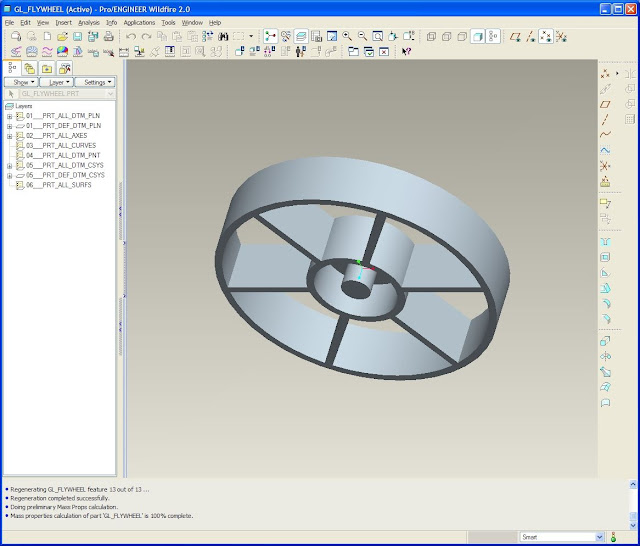 INERTIA at CENTER OF GRAVITY with respect to _GL_FLYWHEEL coordinate frame: (KILOGRAM * M^2)

OK...to solve this, I need to equate the flywheel rotational speed (in radians per second) to the equivalent bike velocity (in meters/second). Well, the assumption above was that the wheel rollout was 2080mm, or 1 revolution = 2*Pi radians is equivalent to 2080mm of rollout.

Lastly, I'll plug this relation into the simplified KE equation above along with the calculated Izz from the solid model.

42.6 kg is equivalent to a rider weight of ~94 lbs...now, that's also not including the other rotating bits (like the pulleys, cassette, etc.)...but that's pretty darned close to the "equivalent mass" determined using the coastdown and VE above :-D

So...in the end, what does that all mean?  Well, I'll end with one more quote by Mr. Chung:

"Aha. Excellent. It may "coast" better than regular trainers -- but not as well as a bike on a flat road. Likewise, it appears to accelerate faster than a bike on a real road. Steady state load is reasonable, though."

Sounds good to me.
Posted by Tom Anhalt at 7:10 PM