Schwalbe Ironman Tires - A Clincher, A Tubeless, and A Tubular 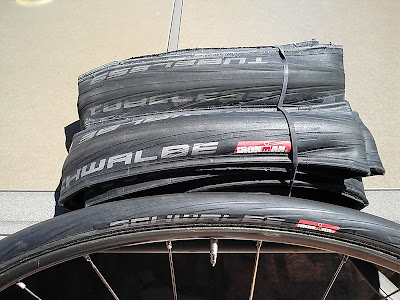 Update Note: Since the testing of these tires and the publishing of this post, it's come to my attention that Schwalbe has apparently discontinued using latex tubes within their tubular tires. As such, one should expect the tubular version of the IM tire to roll significantly slower than tested below; in the range of 2-4W slower per tire. The tire tested will now be listed in my spreadsheet summary as "Out of Print" - 14 Nov 2015

Earlier this year, Schwalbe announced a set of tires marketed towards the triathlon/TT crowd...in fact, they're branded with the Ironman logo, so it's not too hard to figure out the target market ;-)

Anyway, the interesting thing about this announcement was that it wasn't just a single tire, but actually 3 tires: a clincher, a tubeless, AND a tubular model.  The design goal for this line of tires was to come up with the best combination of tire properties (i.e. Crr, aero, and durability) for going fast (and far) against the clock. For aero, the tires are sized at 22C and have a noticeable parabolic shape.  Additionally, there's a pattern molded into the sides of the tire that is intended to act much like the boundary layer trip features we've seen on tires like the Mavic CXR offerings.

Luckily, I was able to get my hands on a set of these tires and was able to put them on the rollers to see how they do.  Upon first inspection, the clincher and the tubeless tires appeared to be virtually identical, with the tubeless model appearing to have an extra layer molded to the inside (most likely an air barrier layer), so I expected the tubeless to roll slightly worse than the clincher model with a latex tube.  The tubular model is actually a traditional style "sew up" (i.e. a casing with glued on tread, not a 1 piece vulcanized model) with what appears to be a fairly high TPI casing with the a tread cap glued on that looks and feels just like the clincher and tubeless models.

So...how did they roll?  Here's the answers:

Interestingly enough, it appears that the tubeless version has LOWER Crr than the clincher, even with the clincher using a latex tube.  I find that very curious...that means there must be something different about the compounding or the casing with the tubeless, because there's no way an added butyl air barrier layer should be lower loss than a latex inner tube.  In fact, at the time of the testing, the Schwalbe Ironman tubeless model was the fastest rolling tubeless tire I had tested, or even as compared to the tubeless tires Al Morrison has tested in the past.

Curious about what some miles would do to the Crr on the tubeless model, I left it on my rear wheel for just over 300 miles and then retested with the result of:

Now THAT is the fastest tubeless model tire I've tested to date (I've got a bunch of tubeless tires I've been testing and I'll post a "compendium" soon), and the only one close to it is significantly wider (25C vs. 22C).

But, the real eye-opener of the group was the tubular model.  Obviously, we know that the type of tire construction used (high TPI casing, latex tube, etc.) makes for a fast rolling tire.  But, to be able to pull that off with a relatively thick tread cap glued on means that there must be some "magic sauce" in the tread compound.  Of course, the performance of that tire also begs the question of why they just don't make an "open tubular" version of the tire for the clincher market instead of the current clincher...

So, it appears that they've done a good job on the Crr front.  The clincher is on par with tires like the Michelin Pro 4s, the tubeless is pretty fast (slightly faster or slower than a Conti GP4000S, depending on miles), and the tubular is smoking fast as well.  If the aerodynamics comes close to other tire models, these tires would definitely be an intriguing option for TTs and triathlons, especially for folks who plan on going pretty fast and/or in low yaw conditions (because of the relative narrowness) .

Also, as one extra data point on latex vs. butyl, I tested the clincher with a butyl tube instead and here's how it rolled:

Once again, this shows that a butyl tube "costs" ~3W per tire as compared to latex...just sayin'  :-) 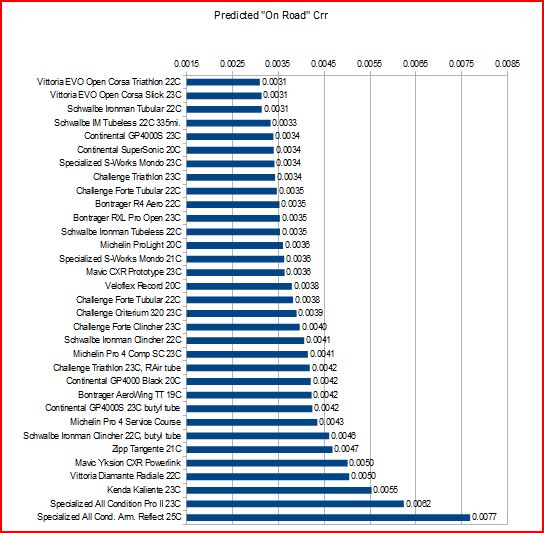 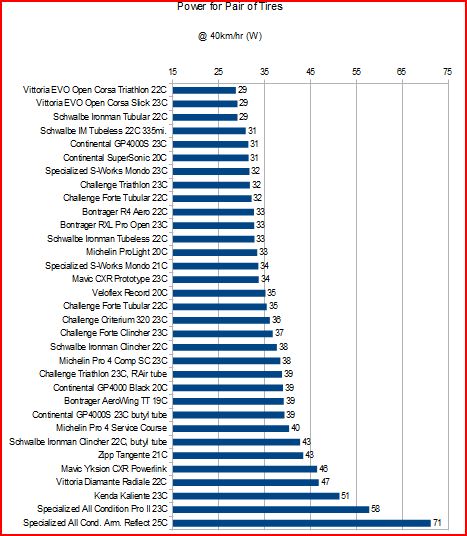