Well, after my last round of roller testing, and the quite good performance of the Conti Terra Speed, I was curious about how the seemingly only slightly more "knobby" Terra Trail would perform. So, I bought one to test out. At the same time, an acquaintance from the Slowtwitch forum, Rob Pickels, informed me that he had a pair of the new tubeless-ready Challenge Gravel Grinder Pro HTLR (that's a mouthful!) tires that he decided not to use and would send to me if I was interested in testing them out. I had been curious about the GG Pro HTLR since it had come out, since some of the reports were that the coating used by Challenge to make the tire more air-tight was butyl...and if that was the case, I didn't have high hopes that it would perform as well as their non-TLR GG Pro. I was especially discouraged when I found out they were listing it as having 2 puncture resistant layers ("2xPPS"), which is what the non-TLR version had. It didn't make sense to me...if the tire is intended to be run with sealant, then a reasonable approach would be to eliminate one, or even both, of the puncture protection strips since they aren't as critical for a tubeless w/sealant approach, and all they do is slow down a tire. 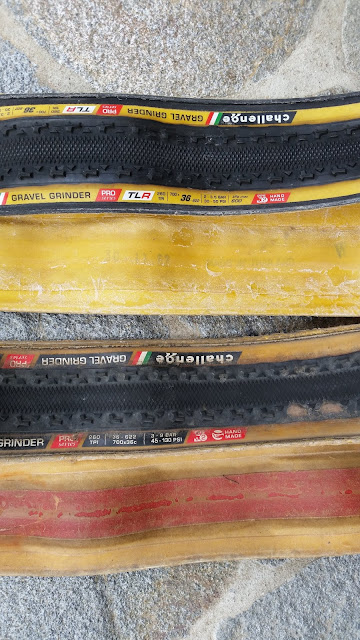 So, once I got my hands on Rob's tires, here's what I found: to my "feel", the coating used on both the outer sidewalls and inner surface of the appears to be more like a latex coating, rather than butyl (thank science!). Additionally, it looks like the HTLR beads have an additional "rub layer" coated with a black rubber (THAT could be butyl...and is there to address the cutting issues with rims like ENVEs). Lastly, on the inside of the casing there is NOT a red material layer like there is on the non-TLR models. I always assumed that was the PPS layers...and now I'm wondering if, in fact, the HTLR models actually eliminated the PPS layers? Take a look here: the tread and inside of the new HTLR is shown on top, while a well-worn non-TLR version is shown below (which had actually been run tubeless with sealant...shhhh...don't tell anyone ;-)

Well, that got me curious, so I poked around the Challenge website a bit and found some things out. Apparently, when one of their tires is listed as having a single "PPS", that layer is installed BETWEEN the tread and the casing layer. When a tire is designated as "2xPPS", that means an additional layer is installed on the inside of the casing, so that it would be between the casing and the tube. Aaah...so, that must mean that despite the sidewall labeling being marked as "2xPPS" on the new tire, they must have eliminated at least the inside layer.

With a bit more digging on the Challenge site, I then came across this graphic, and I think it explains what's going on: 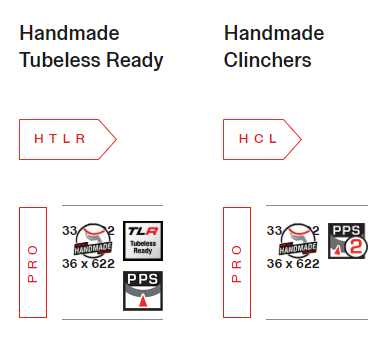 I think I see what's going on...the original HTLR tires must have been mis-labeled...OK, that makes sense.

Anyway...finally, here's how these 2 tires fared in the roller tests (again, full spreadsheet is located at the link to the right, or here):

So, the Challenge GGPro HTLR tire basically rolled identically to the non-TLR GGPro. Seems like any additional rolling resistance from the sealing layers was offset by the elimination of one of the 2 PPS layers. That's a fair trade...

On the other hand, I was slightly disappointed in the Terra Trail performance. I was hoping that the only change was to the outer tread blocks, but I have a feeling additional rubber was also added on the sidewalls. I was hoping it would roll somewhere in a slot ~halfway between the difference in what they actually rolled, but alas, that was not to be. To be fair though, I'm currently using that tire as a front, and I really appreciate the extra grip in loose dirt from the larger side knobs...it's just quite "buzzy" on pavement.