What's up with those funky rings...? 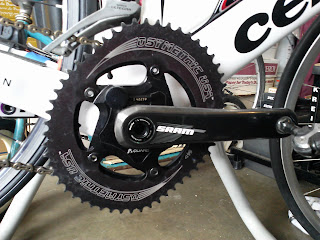 With the successes of Bradley Wiggins in 2012, there has been a lot of interest shown lately on the non-round rings he's been riding.  These rings are nothing new, and non-round rings have been dabbled with for a very long time, but the objective data (physical tests, as opposed to mathematical modeling) on whether or not these rings allow for a greater power output than round rings has been mostly in the negative.  Yet, there are typical reports of riders seeing 15-20W (or more) increases in their power output after mounting them on their bikes.  For a while, it's been speculated that some of these reports may be the result of an artificial inflation due to the way that some power meters calculate their power readings, and mathematical analyses along with user reports have suggested that the "real world" matches the artificial inflation theory.

What is this "artificial inflation" theory, you might ask?  Well, to understand the theory, first one has to understand how bicycle power meters measure and calculate power.  Simply put, for the most common power meters on the market (I'm talking SRM, Quarq, and PowerTap) there is a torque measurement that is averaged over a certain "window" that is then multiplied by the angular velocity to get power, i.e.

However, the power output of a cyclist isn't constant torque, like with an electric motor, for example.  Instead, torque input to the crankarms of a bike is pulsed, with the majority of the torque being applied in a fairly narrow range during the pedal downstroke.  As such, if one plots torque vs. pedal position over a single pedal revolution, you'll typically see a sinusoidal-type plot with 2 "peaks" per pedal revolution.  Because of this, in order to better represent the true power output of a cyclist, the SRM and Quarq power meters have been designed to use what's known as an "event-based" power calculation algorithm.  What this means is that the torque is averaged over a complete pedal revolution (no matter how long it takes) and then the average torque is multiplied by the average angular velocity over that single pedal revolution.  This way, the only measure of angular velocity is a simple magnet/reed switch construction whereby each crank trigger signifies that 360 degrees of pedal rotation have been accomplished in the time between magnet pulses on the reed switch.  The over-riding assumption of this architecture is that the crank velocity does not vary significantly from the average during the pedal revolution, and with the high inertia of a cyclist traveling on the road at any reasonable speed, this is a fairly accurate assumption...with round rings that is.  If tension is maintained in the chain of the bicycle during the pedal stroke, then by definition the crank rotational velocity will be fairly steady.  If one where to be able to measure the instantaneous rotational velocity and the instantaneous torque and calculated the instantaneous power, then if you averaged all of those instantaneous power calculations over the complete pedal revolution, the result would be very close to averaging the torque over the complete pedal cycle and multiplying by the average rotational velocity.  This is why PMs have been designed this way.

Now then, how does this factor into non-round rings possibly causing artificially inflated power values?  Well, the way that most non-round rings are designed to "work" (one exception being the old Shimano Biopace rings) is that the effective chainring size is increased during the times that the legs are applying the highest amount of torque (and, since the system needs to be symmetric, also during the time when the leg is rising back into position in the "recovery" portion.  But, I digress..) and the effective chainring size is decreased during the portions of the pedal stroke across the top and bottom of the cycle. This causes the instantaneous rotational speed of the crank to vary in a roughly sinusoidal manner (dependent on the shape of the ring) above and below the average crank rotational velocity.

For a given wheel speed and for equivalent number of teeth on the chainring, the average rotational velocity of a non-round ring will be the same as for a round ring.  This is true because in order for the teeth to be at a spacing of 1/2", that means that the circumferences of a non-round and round ring of the same tooth count are equivalent.  However, with a non-round ring that means that, by design, the rotational velocity of the crank is being manipulated such that the rotational speed of the crank is slowed during the downstroke (and upstroke portions as well due to symmetry) to a value below the average

So, what does that mean?  In short, it means that during those times that the largest torques are being applied, the rotational velocity is lower than the average over the complete pedal revolution.  Since the majority of the power is produced in the downstroke portion of the pedal cycle, this means that power reported will tend to be over-reported, hence the term "artificial power inflation".  Get it?

So, that's the theory...how does it end up working in reality?  Well, in short, reality matches the theory fairly well and by my measurements, using Osymetric rings on a Quarq power meter will cause the Quarq to report a power value ~2.7-3.5% higher than reality.

Test performed on a LeMond Revolution trainer to maintain a rear "wheel speed" similar to riding on the road (i.e. high flywheel inertia)

54T Round and 54T Osymetric both mounted on the same Quarq with the Osymetric in place of the inner ring. This was done to eliminate changes in drivetrain losses due to using different cogs. Calibration shows the Round ring (mounted on the outer position) reads 1% high and the Osymetric (mounted on the inner position) reads 1% low and the torque slope was set to the average value between the 2 rings. Power values from the Quarq reported below were corrected based on the calibration. Zero offset was checked before the first pair of runs, before the 2nd set of runs, and then at the finish. Offset did not move by more than 5 counts (512, 507, 511) which is equivalent to 1.3W @ 80 rpm. Runs were ~4 minutes in length.

So, in brief, based on just this limited test, there actually DOES appear to be a "non-round ring inflation factor" of 2.7%-3.5%. (BTW, Dan Connelly estimated a 4% "inflation" based on a 20% within pedal stroke speed variation here (http://djconnel.blogspot.com/...uniform-cadence.html) and by my measurements the Osymetric ring would cause a 20% crank speed variation assuming a constant rear wheel speed.

So, there you have it...my suspicion is that a good majority of the power "improvements" claimed with non-round rings are merely mis-measurements of the actual power.  It's important to note that this sort of power inflation is not anything that can be "calibrated out".  It will be present even if the PM torque calibration is perfect since it's a result of the power calculation algorithm itself and ANY power meter that employs an "event-based" calculation as described above will suffer from it.

Now then...on the question of whether or not non-round rings have the potential to actually increase pedaling power output...well, I have my opinions on that, but I'll leave that for another blog post....