Aero Field Testing using the "Chung Method" - How sensitive can it be? 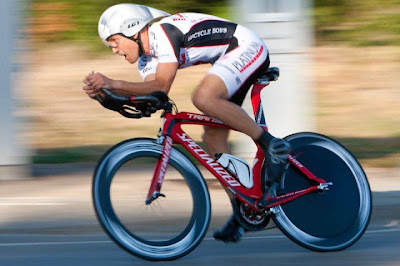 As some of you may know, I've been field testing bike stuff and positioning with a power meter for 4 or 5 years now.  My method of choice is Robert Chung's "Virtual Elevation", or VE protocol, sometimes known as the "Chung Method".  He has a great presentation on it here: http://anonymous.coward.free.fr/wattage/cda/indirect-cda.pdf . When I first read Robert's info, I wrote up a spreadsheet that I've used since then to analyze everything from position changes to tire air pressure effects. Of course, since I wrote that spreadsheet for my own use, it's not exactly the most "user friendly" (Hey, I know what I'm supposed to do, I wrote it! ;-)...but, don't worry, everyone else is in luck since Andy Froncioni (the main tech guy behind Alphamantis and the ERO facility that recently opened at the indoor track in Carson) added a version of the same calculations (called "Aerolab") to the freeware power meter analysis software, Golden Cheetah.

So, the question with this type of testing usually comes down to just how sensitive can it really be...especially as compared to something like a wind tunnel?  Admittedly, there are some limitations to this type of testing, the main one being (at present time) that the results are mostly limited to zero yaw conditions, but as we saw in one of my previous blog posts, the most common yaw angles a TT'er or triathlete encounters are usually centered around zero yaw.  Using the tool to make evaluations at zero yaw still can hold a significant benefit for someone interested in improving/testing bicycle aerodynamics.

A couple years ago, Dr. Andrew Coggan published a blog post titled "A Challenge to Cycling Aerodynamicists" in which he described a field test he undertook to take up something he coined the "Tom Compton Challenge".  In short, it's an effort using known geometric shapes to try to determine the "sensitivity" of the aerodynamic field testing method.

Well, last year I discovered that my preferred field testing venue for VE runs had suffered some "traffic rerouting" that had made it much less appealing for the purpose (part of that "discovery" occurred when Andy sent his test setup to me to try and the results from my first course were very mixed due to excess vehicle interference after the nearby roads had been modified).  So, I started scouting around for an alternative course and luckily found one that is much closer to my home (I can ride there in just a few minutes) and that has laps that are significantly shorter than the old course (shorter laps = shorter test run time).  Both of these courses are best described as a sort of "extended halfpipe", an "out and back" course having a U-shaped elevation profile that allows for turnarounds to be taken at low speeds and thus avoid braking. Since identifying the new course, and having done just a few tests on it, one thing I wanted to do was to repeat the type of testing that Andy did and attempt to characterize the potential "sensitivity" of the course using the VE method.

Using Andy's setup as a guide, I set about figuring out what sorts of objects I could use for the test.  I took a quick trip to the nearby Michael's craft store and acquired some styrofoam spheres, 2", 3", and 4" in diameter. 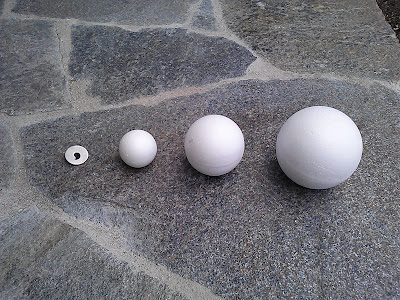 In my garage I had an appropriate length of 1/2" diameter wooden dowel, and short work with a hand drill on the spheres and I had a setup that placed the spheres well out to the side where they should be in clear air while riding. Also shown in the pic above on the left is a small washer which I placed on the end of the dowel during the first run instead of a sphere.  I did that to act as a "cap" and make it more likely that the flow over the end of the cylinder stayed perpendicular.  Here's how the dowel and sphere setup looked after being zip-tied to the basebar of my TT bike. 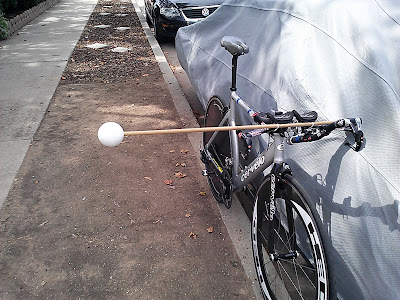 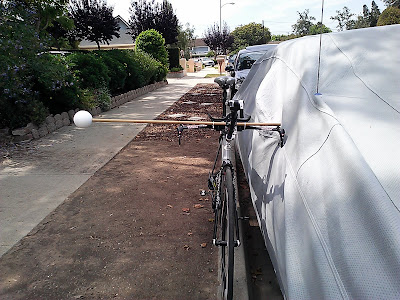 The hole in each sphere ended up being a nice friction fit, so swapping between spheres was a very simple process.

All runs were recorded with my trusty old yellow-cap PT Pro wheel mounted on the rear, with a cover in place to turn it into a de facto disc.  I prefer to use a PT for my aero field testing since it eliminates the uncertainty of variations in drivetrain resistance across the gearing, plus the PT's "coasting zero" feature allows me to have the power meter zero while soft-pedaling (i.e. turning the pedals slowly while freewheeling) down the descents of the course at least once per lap.  That helps to minimize any power meter drift during the runs.

So, with the test rig sorted out, it was time to head out to the test course and do some runs! To minimize wind and traffic effects, I prefer to head out to the course early on a Saturday or Sunday morning...before the small neighborhood that the course road services begins to wake up and starts moving around. A couple weekends ago, I headed out on a Sunday morning and rode over to my test course in 5 minutes, taking a small musette bag with the spheres, a notebook, and a couple of small tools I might need.  Starting at 6 am, I did the runs in the following order:
I mixed the runs up like that since I suspected that the "rod only" and 2" spheres may be close to the same measurement (part of the rod is covered up by the sphere) and I wanted to make sure there was a good separation between the cases.  I actually didn't sit down and calculate out the expected differences in CdA beforehand.  I wanted to first determine what the VE analysis showed as the differences from the baseline (run #1) and then see how close to the calculated values the VE runs were.  I did this because the method I use for determining the CdA using VE is a visual "leveling" procedure, and so there's a bit of "judgement" involved in determining what value best "fits" the overall plot to being level, and I didn't want that judgement being affected by any predetermined knowledge of what the expected differences should be.

Once I returned home, it was time to download the PT files into the computer and do the VE analysis.  As I described above, although it can be done in GC's Aerolab feature, I prefer to use my own home-brewed spreadsheet, mostly because I find it easier to expand the vertical scale to get a better handle on the leveling procedure, but also because I've recently added a feature that varies the on-road Crr as a function of the ambient temperature.  In order to use the spreadsheet, the following inputs are required:
As an example of the spreadsheet and what the VE profile plot ends up looking like, shown below is a snapshot of the first run from the testing: 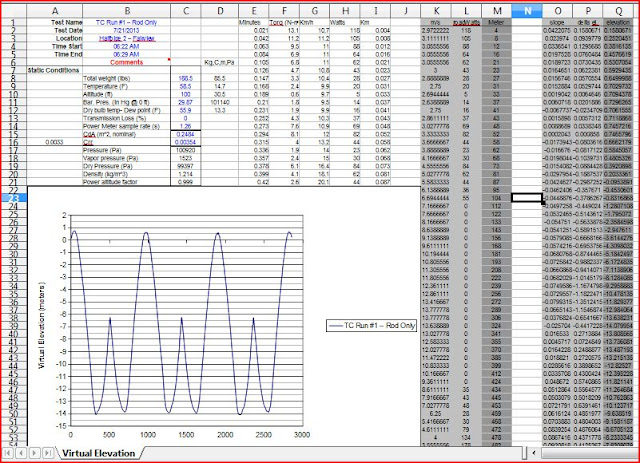 OK then, let's get to the results.  Using the procedure outlined above, my best determination for the measured CdA from the runs was as follows (in order that runs were performed):
Now, how does that compare to what should be expected for those shapes?  To determine that, I made a spreadsheet that calculated the expected CdA changes based on the typical values of Cd (in the Re number range of interest) for a sphere and a cylinder (sphere = 0.47, cylinder = 1.17) and their respective cross-sectional areas based on my actual measurements. As mentioned above, when I compared the "rod only" run to the sphere runs, I had to subtract the portion of the rod that was covered by the cylinder from the CdA calculation.  I then took those expected changes in CdA and added them to the measured CdA from the "rod only", or baseline run to determine the expected CdAs for the runs with the spheres.  Here's how they compared:


Another way of looking at it is the expected and measured differences from the baseline:


One last way of looking at this is from the perspective of expected change from from the previous run.  Here's how that worked out:

Not bad, huh?  I've always said that when using this technique I consider measurements that are within +/-.001 m^2 to be basically "tied", and the above appears to bear that assumption out as being fairly conservative.  It also gives me confidence that with careful technique I should be able to easily detect CdA differences on the order of .003-.005 m^2 and greater.
Posted by Tom Anhalt at 12:42 PM