Even more Crr results...and another example of why Crr matters, Mavic edition

I did a short bit of roller testing yesterday.  The main incentive for that was I was able to get my hands on a prototype set of the new Mavic CXR60C clincher wheels and I was itching to see how well the new CXR clincher tire rolls.  Back in May I attended the press introduction for the CXR60 wheel line on behalf of Slowtwitch.com.  You can see my review of the wheels at that time here: Mavic CXR60 Intro.

At the time of the press introduction, none of the attendees were able to ride the clincher version of the wheels, so a big question mark in my mind was how well the tires performed from a rolling resistance standpoint.  From the wind tunnel results, obviously the wheel+tire system performed excellent in regards to aero drag, but I already had experience with the tubular CXR tires and found them to be slow...so much so that they basically "wasted" the aerodynamics.  More on that later.

In any case, here's the results from yesterday's roller testing:

Besides the Mavic tires (I tested 2 and they were nearly identical) I also tested a Challenge Triathlon clincher.  Both the Mavic and the first run of the Challenge Triathlon were run with latex tubes, and then I decided to run the Challenge tire again after swapping out the latex tube for a Panaracer R'Air tube.  This tube is a butyl based tube that is advertised to be compounded to be more flexible like a latex tube and I was curious to see if it made any difference in the rolling resistance.  It did...but just barely (~1W for a pair @ 40 kph)...and that improvement is definitely not worth the cost of the tubes, especially considering one can get a latex tube for the same price.

The Mavic tire's Crr of .0036 is a very respectable result...much better than I was anticipating based on what I had measured for the tubular and what the Mavic engineers had claimed the difference was between the tires.  By comparison, the average Crr I've measured for brand new Continental GP4000S tires is only slightly better at .0034, and is significantly better than the Michelin Pro4 Service Course Comps at .0041. Don't forget...for this testing (and the uncertainties involved) I consider anything within .0001 of Crr to be basically "tied".

At the end of the Slowtwitch.com article I linked to above, I had created a chart showing the combined affects of Crr and aero drag like I outlined in a previous blog post (Why Crr Matters...) Shown below is how that chart looks with the measured Crr for the CXR60C prototype tires. 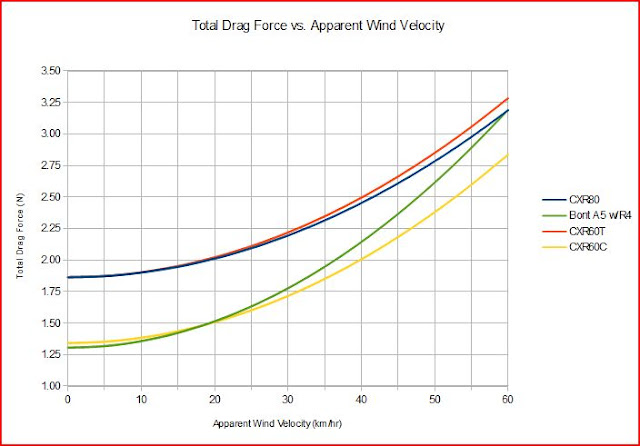 It's fairly obvious from that chart that the CXR60C is the fastest wheel+tire system that Mavic makes.  In fact, the difference for a single front wheel at an expected apparent wind velocity of 40 kph is on the order of 5-6W on average in favor of the CXR60C over both the CXR80 and the CXR60T tubular wheels.

The latest published version of the roller testing Crr spreadsheet can be found in the link at the upper right under "pages". 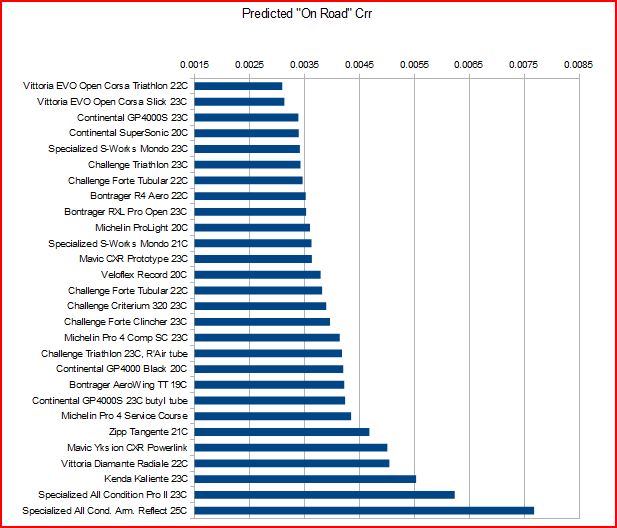 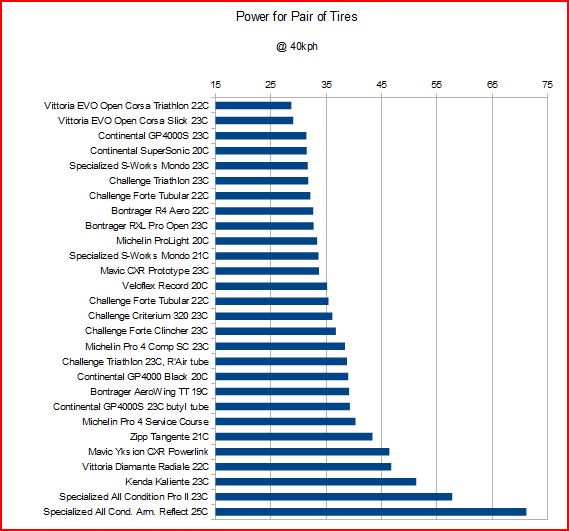